The 100th Anniversary of watchmaking for Seiko has brought forth a variety of new limited edition models inspired by Seiko’s most iconic watches.  Today, we introduce the very first model of the Seiko Prospex series to be introduced to the US market, the Marine Master Professional 600m SBDB008, or the highly anticipated, Spring Drive Tuna Can.

This limited edition of 300 pieces pays tribute to a diver design Seiko first introduced in 1975.  The first shrouded “Tuna Can” was an automatic 600m diver that used a titanium shroud to not only offer shock resistance to the inner case, but was also used because of its light weight, as well as the corrosion and abrasion resistance.  Three years later, Seiko introduced the 1st quartz 600m diver which had similar black and gold accents.  The combination of the two models is apparent in the design, but also in the sense of the movement.  The mainspring driven, quartz regulated Spring Drive movement offers the best of both worlds, all in the same timepiece. 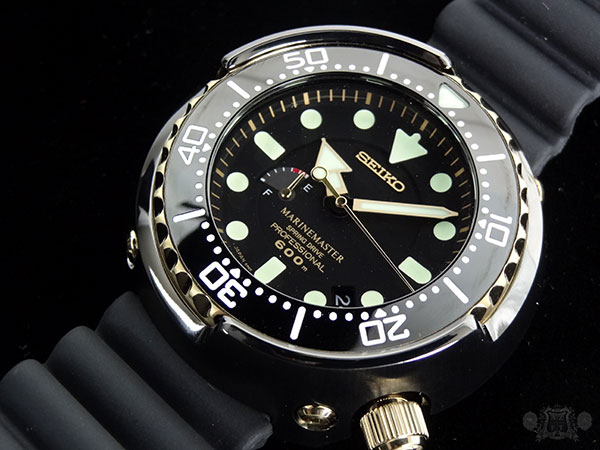 The 5R65 Spring Drive movement utilized derives all its power from the mainspring, with no battery supplying any power.  The Tri-Synchro Regulator replaces the escapement, allowing for quartz like precision in the unwinding of the mainspring.  Due to its low energy consumption, the use of a quartz crystal, integrated circuit, and electro-magnetic brake are possible.  As the mainspring unwinds, the mechanical energy is  converted to electricity allowing the quartz crystals frequency to be translated through the IC, and tells the brake to allow the “glide wheel” 8 rotations per second.  The glide wheel rotates in only one direction, providing the ultra smooth motion of the gliding second hand on top of the quartz like accuracy in a mechanically driven watch. 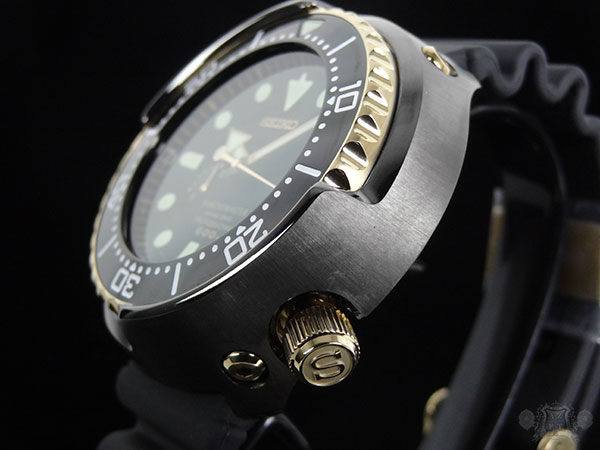 The new DLC coated titanium shroud offers great scratch resistance and hardness. The total width of the case not including crown is just over 50mm, and is also 16.2mm thick.  The DLC has a dark gray finish with vertically brushed finish and some high polished accents on the front edge.  The torque control uni-directional rotating bezel moves very smooth and has an incredible feel.  The gold highlight accents on the bezel are exposed from 12:00-3:00 and 6:00-9:00 allowing for easy grip, but also contributing a nice detail.  The gold plated crown  is located at 4:00, allowing for comfort and security, but also looks great.

The use of an L shaped packing material within the case contributes greatly to its 600m water-resistance.  This air-tight and water-tight timepiece has a thick sapphire crystal with anti-reflective coating which is also useful in withstanding the pressure at extreme depths.  The strap is polyurethane, which was also found on the original from 1975.  They use the PU strap because of its elasticity which again, proves very helpful accommodating to changes in wrist size at different pressures.

Seiko’s in house developed Lumibrite is put to effect in full force with the SBDB008.  It is applied incredibly thick on both the hour and minute hand, the tail of the second hand, each index, and the 60 minute mark on the bezel.  This is honestly one of the strongest glowing pieces I have seen, with very little light bringing out its incredible luminescence. 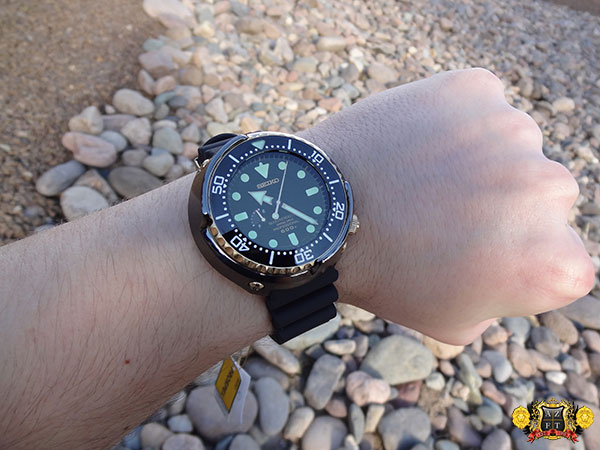 The size of the watch is large in width and thickness, but the lug to lug width is short, giving a great appearance on the wrist.  Though the shroud is titanium, there are still steel components which add to its weight.  The total weight on this piece is 118g, which is still not incredibly heavy considering its size. 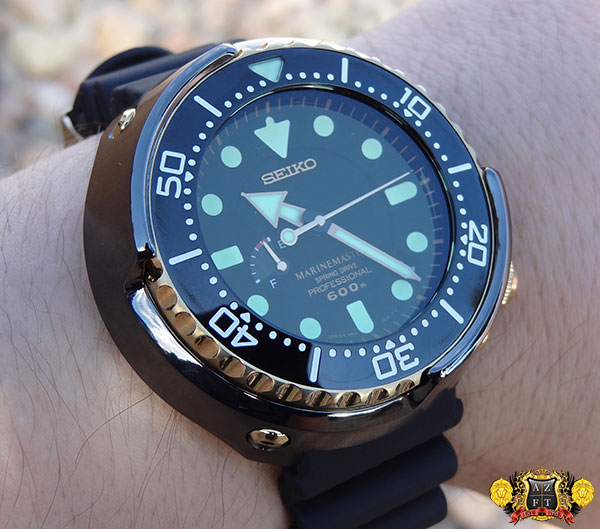 The MSRP on the Seiko Prospex Spring Drive Tuna Can SBDB008 is $4,500.  This is a limited edition with only 300 pieces for the entire world and is not only the 1st Spring Drive movement to appear in the Tuna, but most likely the last.  As always, if you have any questions, please feel free to call us at 1-800-486-3996 or submit an inquiry through AZFineTime.com.

See our video review below…