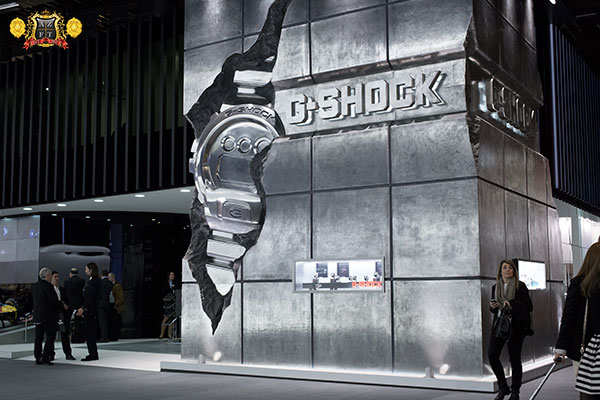 Casio was actually one of the 1st meetings we had here at Baselworld.  As one of our strongest growing brands, we knew Casio would have some amazing new technology down the road, and this year is a perfect example!  We are extremely proud to bring you… the new Basel releases for Casio. 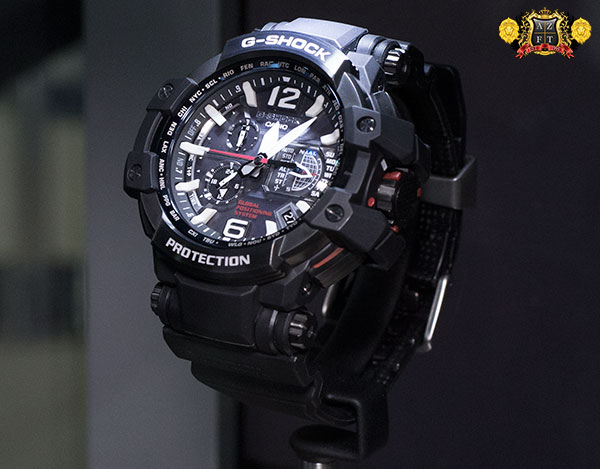 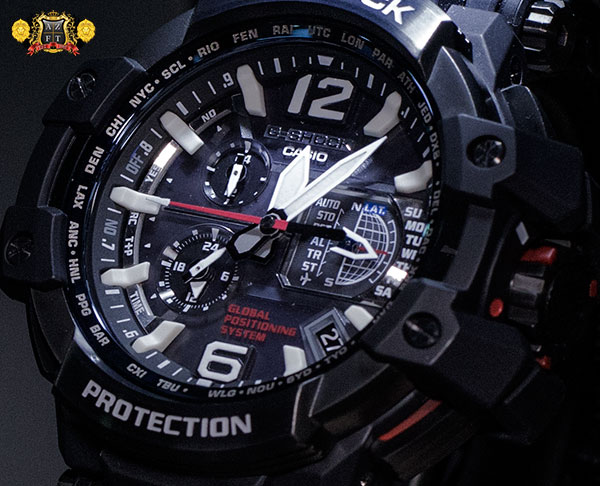 1st, we introduce the new G-Shock Hybrid GPS!!!  This new introduction will feature not only GPS capability with self-adjusting timezones, but also Multi-Band 6 (if in range of a tower), to get accuracy updates with less power consumption.  That’s not all the new GPS Hybrid has.  It is also solar powered, has 40 timezones, a 1/20th of a second chronograph (up to 24 minutes), countdown timer, daily alarm feature, and of course, is Triple G resist!  All models will have sapphire crystal with AR coating, and be 56mm wide.  The new module 5410 also has a full auto LED light (as well as Neo-Bright), airplane mode, and world time with 40 cities + UTC.  This is some extremely exciting product from Casio! 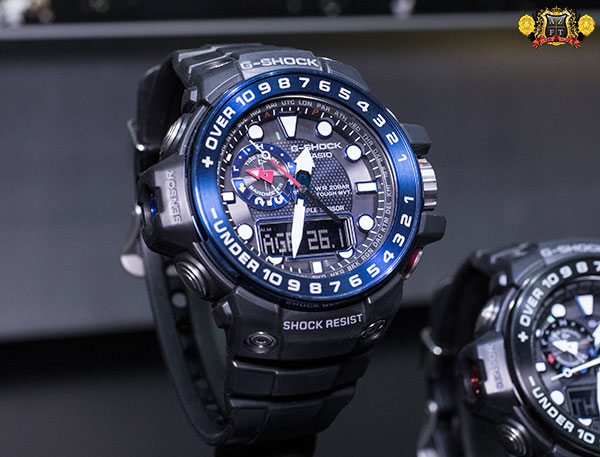 Another impressive addition to the G-Shock line up is the new Gulfmaster.  The GWN1000B-1B has a triple sensor that can measure azimuth, atmospheric pressure, altitude and temperature, and actually has the capability of letting you know when there has been a sudden change in pressure, allowing you to prepare for the change of weather.  There are tons of other functions too, including a moon phase indicator, tide graph, compass, 1/100th of a second stop watch, world time, count down timer, and 5 alarms with optional hourly signal.  On top of all that, the watch is tough solar, going up to 23 months in the dark before needing to be charged and has Casio’s Smart Access technology for ease of use.  Estimated retail is $500 and the scheduled delivery is sometime in August. 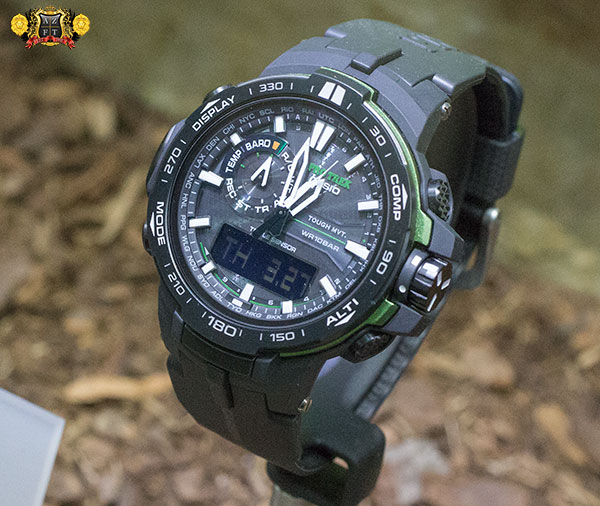 In the Pro Trek line up, the new PRW6000y-1A will feature Smart Access technology, is solar powered, radio controlled, has compass, altimeter, barometer, temperature display, 1/100th of a second stop watch, count down timer, 5 alarms plus a hourly signal option, and if a sudden change in pressure occurs, will sound an alert for change in weather.  This model will feature the new gen 3 sensors, the smallest and lowest power consuming sensor yet.  Estimated retail will be $600, and delivery is scheduled for sometime in April. 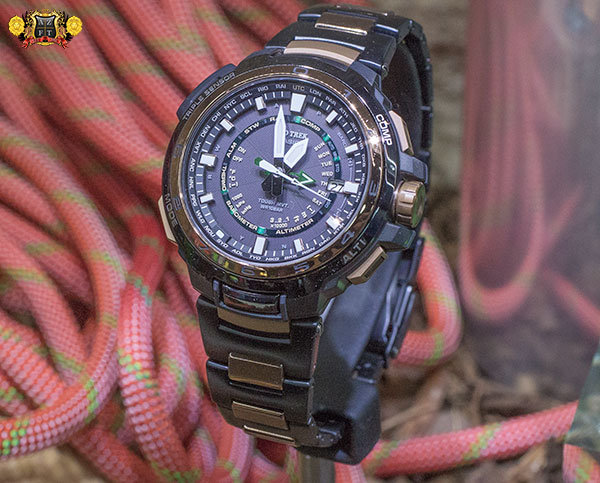 Another exiting edition is a NEW Pro Trek Manaslu!  The PRX7001GF-1 is both black and rose gold plated, giving a new look to the extremely popular technologically advanced analog A-B-C piece.  The estimated retail is $2,100 and scheduled for July delivery. 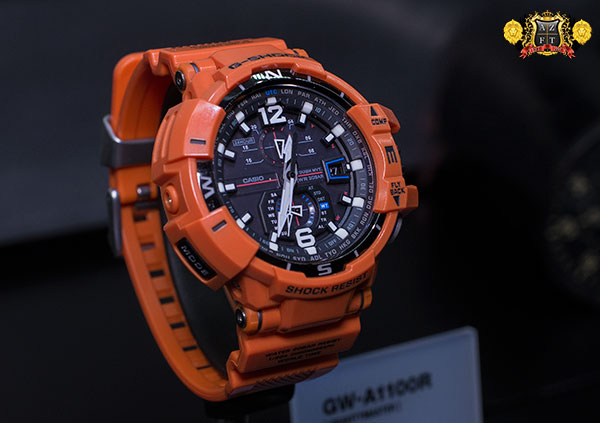 They expanded the selection of Gravity Defier and will now be introduced in a new color scheme in the reference number GWA100R-4.  Retail on this piece will be the same $650, and are estimated to arrive around June. 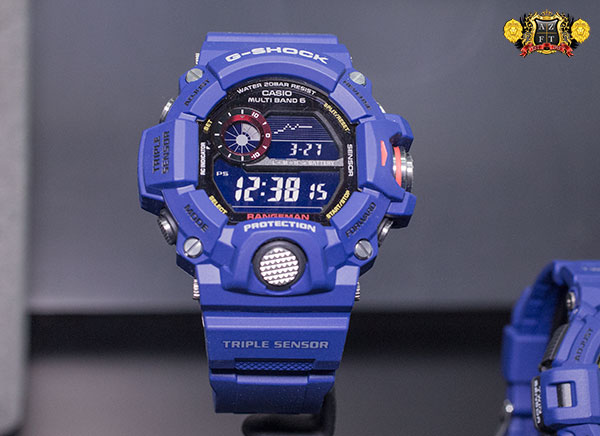 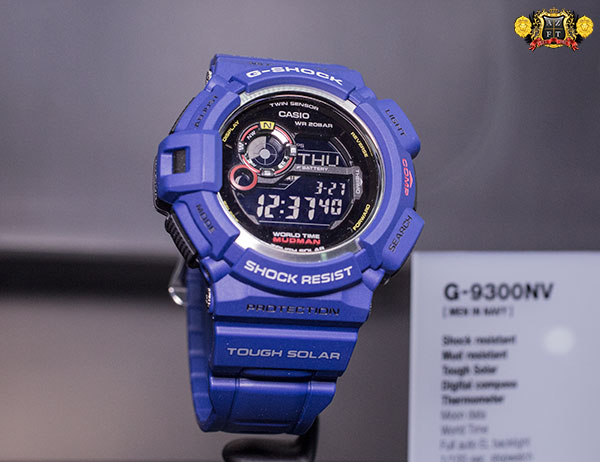 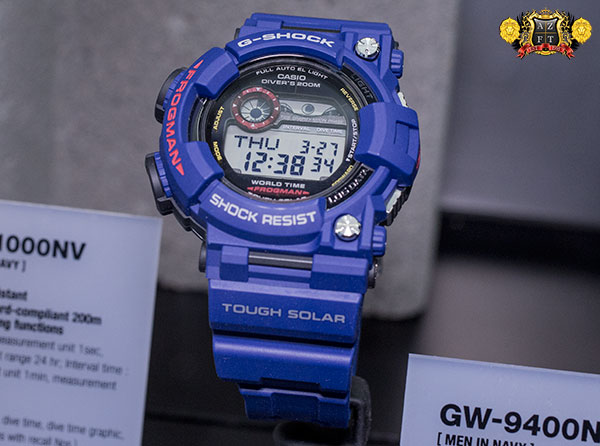 The navy series of limited edition Rangeman, Mudman and Frogman will be headed stateside.  The series looks very impressive in person. 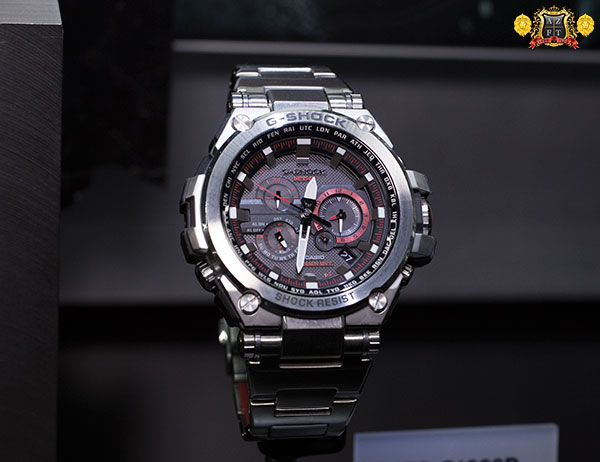 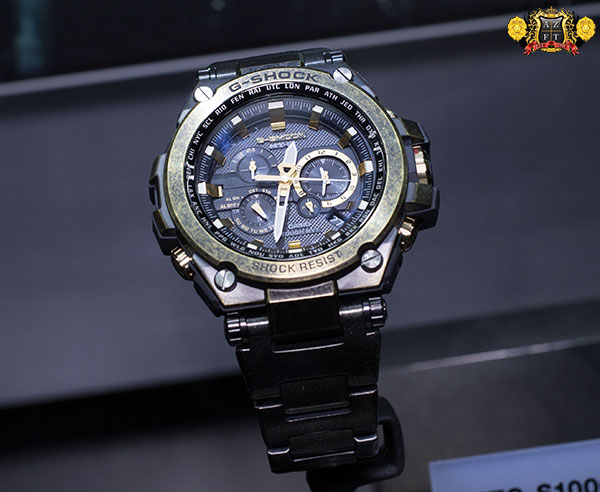 Two new additions to the wildly popular MT-G line up are in future.  Both (as all MT-G’s) are going to be extremely limited.  The MTGS1000D will be very similar to the regular stainless steel model, with red accents on the dial, and red resin lining the bracelet.  The MTGS1000BS is going to be even more difficult to get as it is coming in to the US in extremely small increments.  The distressed steel and yellow gold plated LE looks truly impressive, and of course will be in very high demand. 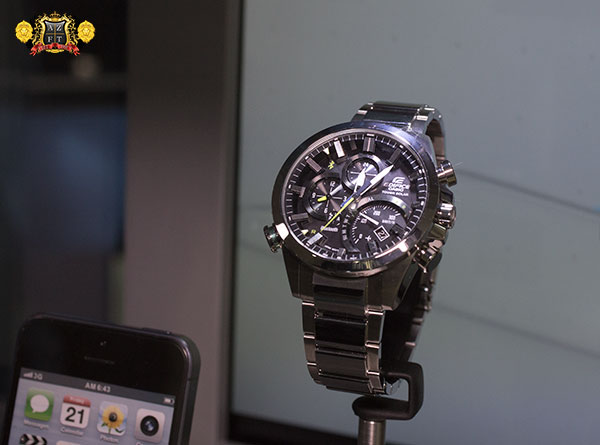 Edifice introduced a very impressive use of Bluetooth technology.  Not only will the new EQB500 adjust the time according to your phone, but the Bluetooth is also utilized for recording lap time logs and many other functions.  There is a lot more to come on this piece.

We saw a lot of other cool items at the Casio booth.  Here’s some of the top tier Japanese domestic models.  Not available to the states, but they are still very impressive! 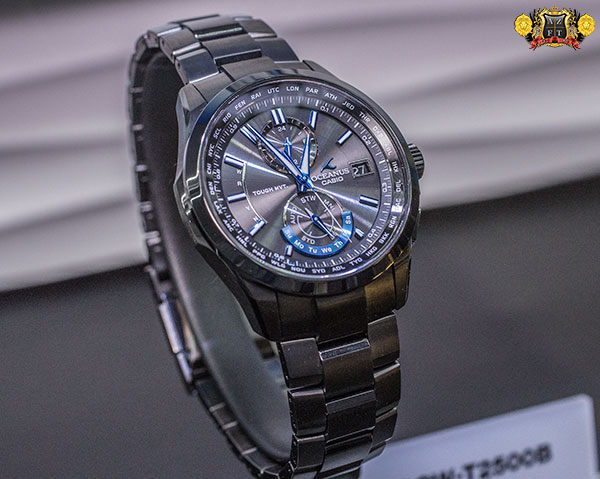 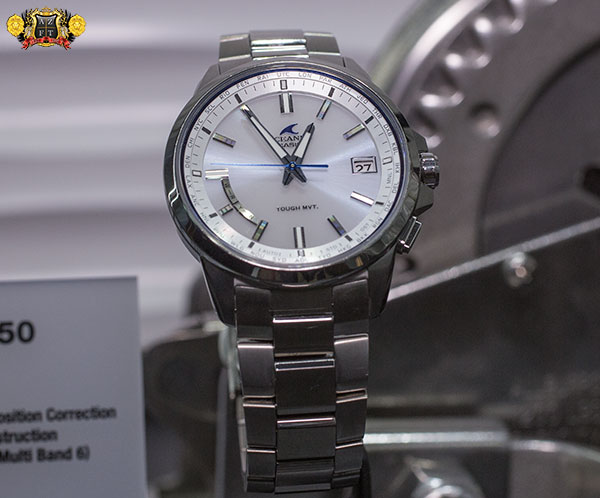 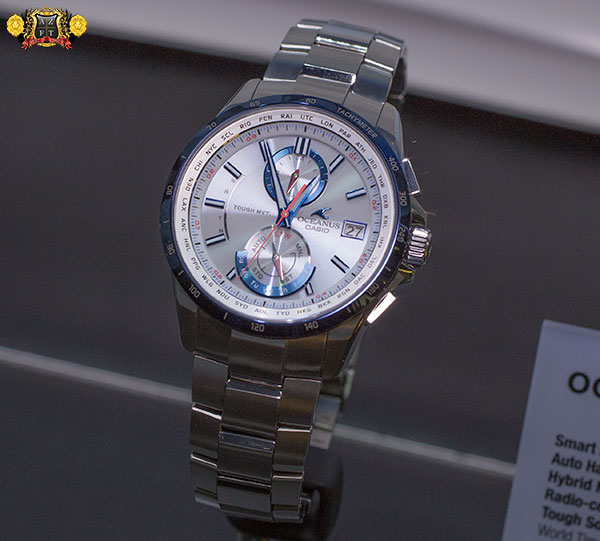 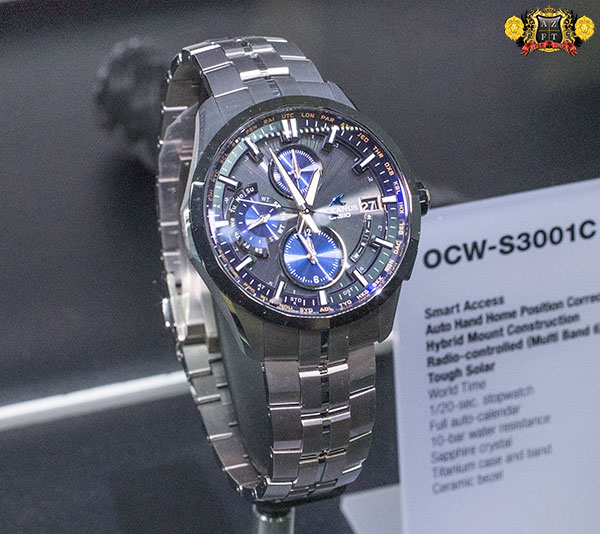 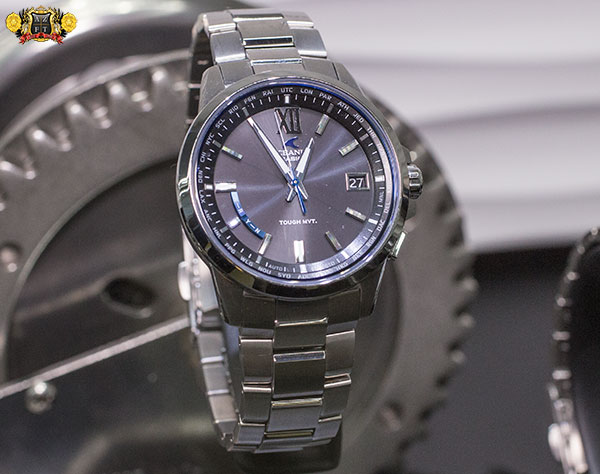 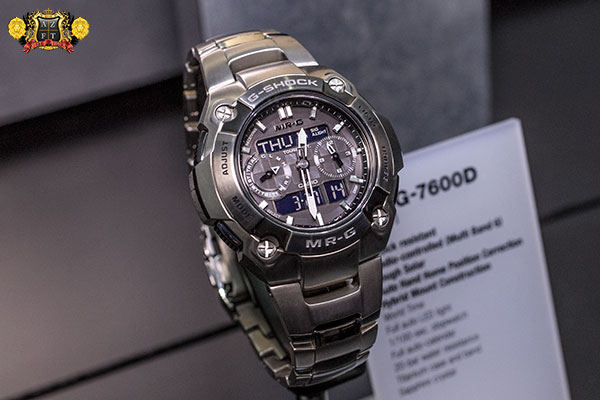 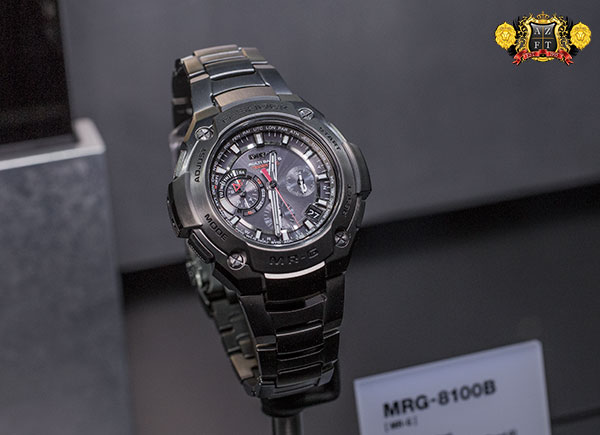 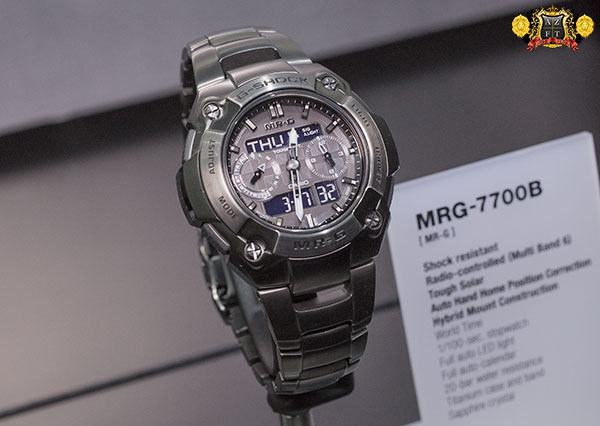